Sharks are out in full force off the East Coast and around the Sunshine State just as beachgoers return to Atlantic waters this summer.

A shark attacked a man swimming near a fishing line off the coast of Florida's Grayton Beach State Park Thursday, and officials in Volusia County responded to separate incidents involving a 12-year-old boy and a 71-year-old man Monday.

Farther north up the coastline, photos showed a dolphin swimming near South Carolina that had likely been mauled by a shark and near Rhode Island, a juvenile great white shark was recently tagged for the first time – though it was not the first to be detected in the area.

Maine announced last month that its state beaches and coastal parks were set to adopt a flag system used in the nearby New England state of Massachusetts to warn residents of the presence of sharks.

The Pine Tree State saw its first documented fatal shark attack in July of 2020 and Massachusetts' Cape Cod peninsula has seen the number of Atlantic great white shark detections increase since the species was designated as protected and as seal populations have continued to rise.

A 2018 white shark attack at Massachusetts' Newcomb Hollow Beach that took the life of a 26-year-old man marked the first fatal shark attack in the state since 1936.

Although shark attacks around the world decreased for the third consecutive year in 2020, there were 10 unprovoked bites resulting in deaths – making it the deadliest year for such attacks since 2013.

While shark sightings and detections have increased on the East Coast and in the area, the Atlantic White Shark Conservancy (AWSC) notes on its website that "stock status remains uncertain."

The AWSC works in collaboration with the Massachusetts Division of Marine Fisheries to tag and track white sharks, after which data are shared with safety officials and the public.

"Before gaining federal protection in the late '90s, it's estimated that the population of great white sharks in the Northwest Atlantic may have declined as much as 80% as a result of fishing pressure," AWSC CEO Cynthia Wigren explained in an email to Fox News on Friday. "Over the past decade, great white shark sightings and catch records have increased, suggesting some level of population recovery, but the status of the species remains uncertain. Conservation efforts are critical to the long-term survival of the species."

Wigren also noted that, based on historical data dating back to the 1800s, the white shark distribution along the East Coast "has not changed."

"White sharks can be found as far north as Canada and south into the Gulf of Mexico. Data collected over the last decade can be used to monitor any changing trends in regional abundance moving forward," she said.

90% OF SHARKS MYSTERIOUSLY WIPED OUT NEARLY 20 MILLION YEARS AGO: RESEARCHERS

Researchers for the conservancy told The Boston Herald last month that while data from eight years ago showed there were only 11 individual sharks detected along Cape Cod, in 2020, the group detected 118 individual sharks in the region – although there were more acoustic transmitters deployed to aid in the search.

In 2019, representatives of The Massachusetts Shark Research Program said they had tagged more sharks on the Cape than ever before.

The most detections, according to AWSC, have been in August over the last four years. Shark season extends through the end of October.

Ocearch, a shark-tracking organization, has reported that several great white sharks have been spotted around beaches in New York, New Jersey and Massachusetts, telling the New York Post that there are "thousands" of sharks on the East Coast right now.

"It wasn’t until the hunting and killing of seals was outlawed in Massachusetts in the 1960s and in the entire country in 1972, via the Marine Mammal Protection Act, that seals began to repopulate the region," Wigren said. "With the resurgence of seal numbers, sharks have returned to nearshore waters off the coast of MA in search of a steady food supply."

Wigren advises that people who choose to enter the water be aware of the presence of white sharks in addition to the more than 50 shark species found off the East Coast.

A great white shark swims just below the ocean's surface.

She advises that humans take stock of the fact that sharks hunt for seals in shallow water, avoid murky or low-visibility water, swim in groups and close to shore, limit splashing and adhere to signage and instructions from lifeguards.

"It's important for beachgoers to be aware of their surroundings and pay attention to signs, flags and safety guidelines," she concluded.

To the West, juvenile great white sightings along the California coastline have also increased.

According to the May 7 issue of Del Mar City Hall's Del Mar Weekly, Cal State University Long Beach Shark Lab's Chris Lowe told local officials that new data showed the numbers of white sharks have been dramatically increasing over the past decade.

A similar study recently published in the journal Biological Conservation found that between 2011 and 2018, great white shark numbers in Pacific waters had risen.

They identified nearly 300 adult and sub-adult individual great whites – a figure up from a 2011 three-year study that found just 219 sharks. 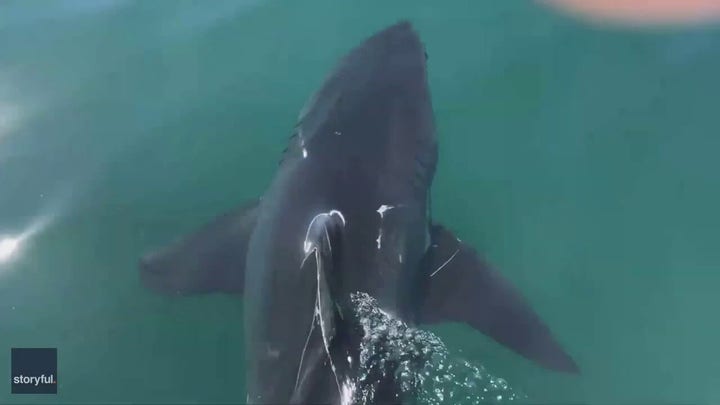 Their research could indicate that measures to protect the species are working.

That said, as LiveScience pointed out last month, white sharks are threatened by overfishing and poaching.

"It’s hard to estimate how many white sharks are in our oceans, as they are relatively rare. Research shows that protections for sharks have likely improved their numbers, particularly in the Northwest Atlantic," the National Oceanic and Atmospheric Administration (NOAA) Fisheries said in 2019.

Notably, NOAA says there is "currently no evidence that sharks are spending more time near shore as a result of warming waters," although the Environmental Protection Agency (EPA) says the impact of climate change is heating up ocean waters, subsequently impacting marine ecosystems like coral reefs.

Earlier this week, NOAA and the National Aeronautics and Space Administration (NASA) announced that the agencies had found that Earth’s energy imbalance approximately doubled from 2005 to 2019, examining satellite measurements and data from NOAA buoys.

"We need to convey a sense of urgency because the world is changing quickly. The next ten years is likely to be the most important time in the next 10,000 years," she said. "We have options that we are going to lose within ten years unless we take action now. Every day, options close. Take care of the ocean as if your life depends on it because it does."