Concerned community member arrested during school board meeting speaks out

Loudoun County, Virginia schools have been under fire for new transgender policy proposals and critical race theory curriculum, leading to a school board meeting Tuesday that ended in uproar and two arrests.

Community member John Tigges was put in handcuffs by county police for refusing to leave the meeting and joined "Tucker Carlson Tonight" on Wednesday to speak out against what he perceived as constitutional injustices.

"I was in a place where free speech has to happen," he said. "If you want to redress your grievances about a school board, there’s no other place you can do it than in a school board meeting."

Tigges explained that the incident lawfully took place on public land during a public forum where he was assigned to give comments in front of parents and community members in attendance.

"Every single person there, all 500 parents, had their First Amendment rights trampled on by the Loudoun County school board and its superintendent," he said. 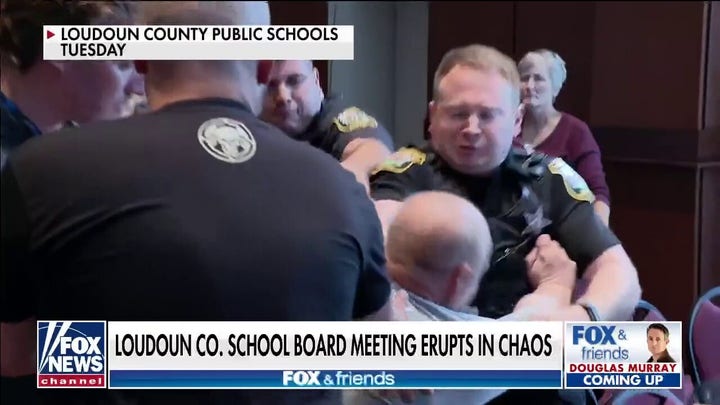 The meeting was scheduled to run until 7 P.M. on Tuesday night even though Tigges confirmed he was arrested around 5:45 P.M. when the board shut it down after hearing applause from the crowd that "they didn’t like."

"There was not violence, there wasn’t crazy going on," he said. "People stayed there, they actually started singing. And then we just encouraged folks, if the school board didn’t want to hear it, we were going to hear from one another."

Tigges explained how community members began lining up to peacefully share their sentiments until the meeting was "suddenly" declared an unlawful assembly and police officers swept in, threatening arrest.

"Which, as best I can tell, was a complete leftist diversionary tactic that was pre-planned because no one that was lined up to speak was involved in any of that."

"There’s such a high standard for free speech," he said. "It is the most sacred of all of our rights and it takes an amazing amount of justification to shut down free speech."